Intercooling is mandatory if you're aiming for high power and reliability from a turbo-motor. But while you're virtually guaranteed lower intake temperatures (and a correspondingly reduced chance of engine damage), it is possible to lose outright power in the process.

When selecting and mounting an intercooler, it is important to consider several factors. The physical dimension of an intercooler gives a pretty good indication to its flow and thermal efficiency (the larger the better) and those having internal fin designs inside the tubes usually offer improved heat exchange efficiency. Long end-tanks are also preferable, as they provide an increased area for the intake air to enter and leave the core, meaning less pressure drop. Intercoolers should also be painted matt black for maximum heat dissipation.

Once a specific intercooler is chosen, it should be securely mounted in a location where there's going to be adequate airflow through its core. That means there must be good flow leading into and out of its core section, which might necessitate the use of ducts.

Intercooler plumbing is an often-overlooked area of a turbo induction system - yet it's one of the most easily and cheaply tackled. Factory cars often have low-cost plastic turbo pipes that have poor flow capabilities due to the reduction in the cross-sectional area of the pipe. The ideal pipe diameter depends on things such as turbo size and airflow, but improvements can generally be made on any mildly boosted factory turbocar. It is often a good idea to go up in pipe diameter slightly, keeping in between the size of the throttle body and the compressor outlet. Mandrel bends are also advantageous as they maintain a constant diameter and create less turbulence.

High quality intercooler hoses make worthwhile improvement if you're running high boost and you're worried about hose deformation. We've heard of one car loosing a substantial amount of power due to deformation of an intercooler hose - and it was only noticed while the car was doing a power run on a chassis dyno.

Heavy-duty hose clamps are also a wise investment that help reduce the chance of highly boosted intake pipes from blowing apart from each other - a commonly-experienced problem. 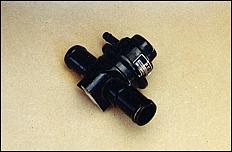 We've already talked about blow-off valves in our Performance Myths special, but because it's such a commonly raised topic we'll tell you again! The reason vehicle manufacturers fit blow-off valves, is simply to reduce turbo flutter noise (when the valve is configured in a closed-loop arrangement). It is also commonly suggested in the aftermarket that they improve turbo life.

Most (all) turbo cars made after about 1988 come with a factory blow-off valve, and the only reason to replace one of these is if it leaks under high boost. Only then do you need to replace it with an aftermarket item (or leave the blow-off valve off altogether). It's easy to get caught up in all the hype, but a blow-off valve is just a simple fast-acting valve capable of sealing boost!

For mega-horsepower turbocharged road cars, it is normal to pull off the factory turbo unit and replace it with a monster turbo. While this gives smooth boost response and excellent top-end torque, the trade-off is a loss of low-range (and possibly even mid-range) torque and an accompanying loss of transient response. So yeah, a single big turbo will be great for cutting loose at over about 120 km/h, but at normal urban speeds it's likely it won't have the low-down boost to produce much torque. You might find it a bit embarrassing to own a genuine 500hp car if you can't keep up with 300hp cars in everyday traffic...

Take a look at any factory-produced high-horsepower turbocar and you'll see there's always more than one turbo under the lid. This isn't by chance - they're made this way to achieve much better low-down torque and turbo response, while still retaining similar top end to a massive single turbo installation. So if you ever decide you want to get lotsa power from a new turbo system, ask yourself if there's enough room to fit two (or more) turbos. 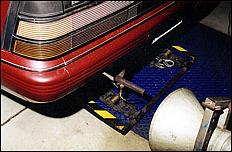 Pushing a few more psi into a turbo engine is as easy as fooling a wastegate. But it's important to make sure that you don't push the engine's fuelling system past its limits in the process. There's one easy way to check this under real load conditions - and that's on a dyno. All good dyno shops have gas analysis equipment that can give you an accurate indication of the mixtures that you're running. Many workshops even have air/fuel ratio meters that can tell you the exact numbers.

Front Section of the Exhaust 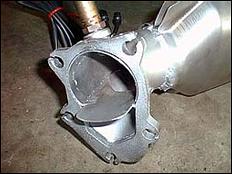 Most people seem to be grasping the idea that the exhaust system on a turbocar should be as free flowing as possible - but there is one specific part of the system that is more important than the rest.

The section located immediately after the turbo and wastegate has a big effect on the maximum flow out of the turbo, and also the rate that boost rises. Many factory cars have a sharp elbow straight after the turbo outlet, which often leads directly into a cat converter. The aim of this is to allow for tighter packaging, less exhaust noise and it's probably cheaper to make too. But if performance is your main goal, it is important to make sure the turbo's outgoing exhaust gas is able to flow freely as soon as it leaves the tips of the turbine blades. This means any necessary bends need to be made with a gentle radius and in a large pipe diameter. Exhaust flow interference from the wastegate should also be kept to a minimum by preferably having a separate pipe leading off the wastegate. For best results, this pipe can be merged into the main exhaust pipe after a minimum distance of around 40 centimeters (16 inches).

A boost pressure gauge is essential for people extracting more from their turbochargers.

They come in various sizes, with either metric or imperial scales, some with a white-faced dial, and some with a peak-hold function that enables you to view the maximum boost pressure attained over any duration. The majority use a typical vacuum-style hose from the plenum as the input source, but some use an electronic input wire, which means routing through the firewall and dashboard is both easier and tidier.

But please note that it's important to test your new boost gauge for accuracy - there's no point in having a measuring devise that doesn't measure accurately. Most turbo workshops posses an expensive high-accuracy boost gauge, which they will usually let you test your gauge against (so long as you ask nicely). 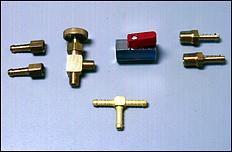 Boosting up a turbo engine can yield massive improvements for very little time and/or money. There are a number of ways that this can be done effectively. An electronic boost controller is enables you to touch-in your required boost level, and they usually come with an accompanying digital read-out. Some also have a useful "overtaking" over-boost setting which lets you dial in an extra-high boost level for a short time.

A pneumatic bleed system (see DIY Boost Control ) can give you in-cabin infinitely adjustable boost at the turn of a brass tap. While this isn't as glossy or impressive, it's been our experience that it works just as well as an electronic controller and costs around ten times less. Another effective way to increase boost is with a flow control valve, as covered in AutoSpeed at Brilliant Boost This system is extremely neat and a has worked very well in service. 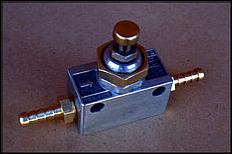 There are certain other ways to increase boost pressure using springs and shortened actuator rods etc, but these methods are considered crude and terribly outdated. 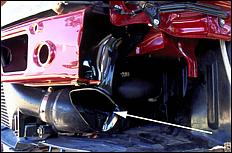 The air path leading into a turbo is another important area to look at when you're chasing more power. The goal here is to achieve a free-flowing supply of cool induction air. Many factory air intakes have a restrictive small diameter intake pipe and a poorly chosen pick-up point. But this situation can be remedied by boring-out the inlet into the factory airbox, and feeding it with a large diameter duct that draws air in from an area isolated from engine-bay or brake disc heat. A high-flowing aftermarket air filter can then be inserted into the airbox for further increases in airflow.

On the other hand, pod and exposed-type underbonnet filters easily outflow a factory airbox, but they usually sacrifice intake air temperatures due to their vulnerable placement under the bonnet. For optimal results, seal off any sources of heat and place a duct leading to the filter - in a similar way to that suggested for an airbox. However, the duct diameter may need to be slightly larger in this case, to fully utilise the high-flowing filter element.

It is also common for car manufacturers to install a large resonant chamber prior to the turbo, in order to reduce turbo noise. These can be quite restrictive and heavy and are better off replaced with a simple length of equal diameter pipe to allow maximum airflow to reach the compressor. 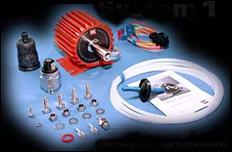 Water injection can be fitted to a turbocar to increase its tolerance to high boost levels, advanced ignition timing or various other power-increasing measures. Or conversely, it can be used as a temporary safeguard against the occasional lack of high-octane fuel. Contrary to popular belief, we've yet to see a turbo engine gain power with the fitment of water injection with no other mods. That is, so long as the engine was running within the line of detonation to begin with.

Having established that, it is important to make sure any water injection system you fit is well engineered and controlled. The points at which the system is turned on/off needs to be carefully defined, and it would also be effective to have the volume of spray increase in proportion to airflow and/or boost. The hardware needs to be set up so there's no chance of nozzle dribbling (don't be rude!), and the spray should be in the form of a fine mist. It is common for high quality aftermarket water injection systems, such as Aquamist, to use water pressures of up to 5 Bar (around 73 psi) to create maximum water atomisation through their specially designed nozzles.

So if you want to run water injection as a precaution on your car, make sure it is well set-up - otherwise you could be doing more harm than good.